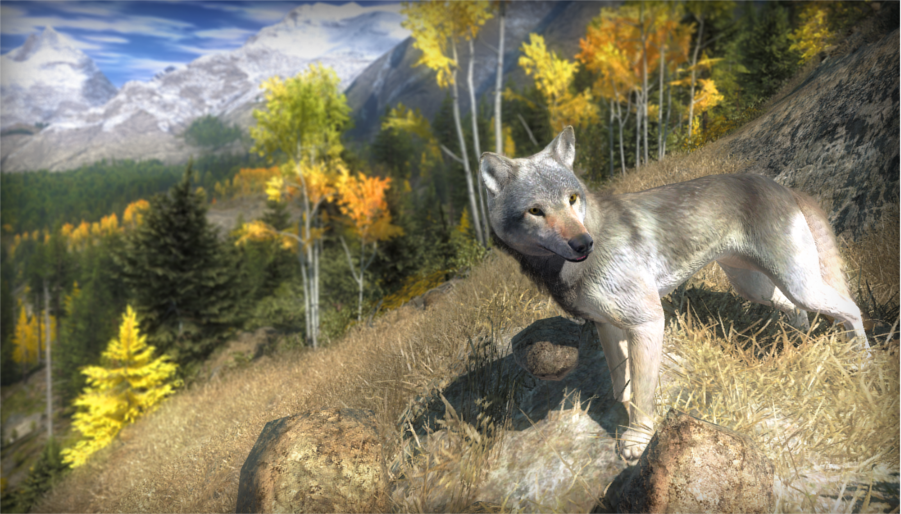 Wolves are one of the most successful predator species in the world. These iconic animals have been long sought-after residents of the EHR and today, we are thrilled to finally bring them to theHunter. They are by far the most complex species in terms of AI and animation, that we’ve ever introduced, and probably will ever introduce. The crown jewel of theHunter animal kingdom if you like. We can’t wait to hear what you think!

Wolves are highly social animals, which is the key to their success in the wild. This is reflected in theHunter by means of our new group behaviour, new hunting behaviour and the calls they make.

A wolf pack in theHunter has a three-level hierarchy, which is visible in their unique animations.  Each pack has one or two Alphas, a bunch of Betas making up the bulk of the group, as well as Omegas. In addition, there is always one lone wolf at the bottom of the hierarchy. When you pick up a howling call on your HunterMate, it will always be the Alpha of the pack.

Wolves are top of the food chain predators, and they will be chasing some animals that get too close to them. So, next time you are stalking a group of Mule Deer, decide to take a shot and raise your rifle, don’t be baffled if you see the deer spooking and running away. A couple of moments later you will surely see a pack of wolves running after them.

Where there are wolves, you might come across carcasses of dead animals which wolves usually prey on. Those carcasses are spawned randomly and act as bait sites, so don’t be surprised when you see a group of hungry wolves nibbling on their downed prey, all according to their group hierarchy. Stay a minute and watch them while they are it, it is truly fascinating!

Wolves use howls to signal stray members of their pack or to ward off rival packs. So, a wolf will not just howl randomly for the fun of it. It is also not likely that a lone wolf will howl on its own as it would then reveal that it has no pack around to help protect it. Your HunterMate will register a call if the howling pack is within its pick-up radius, but howling can be heard far beyond that.

Grey Wolves are hunted by spot and stalk methods or by waiting by a carcass in wolf territory. They can be lured closer with a special “Calf Elk” Caller which also has a chance of attracting Rocky Mountain Elk cows.