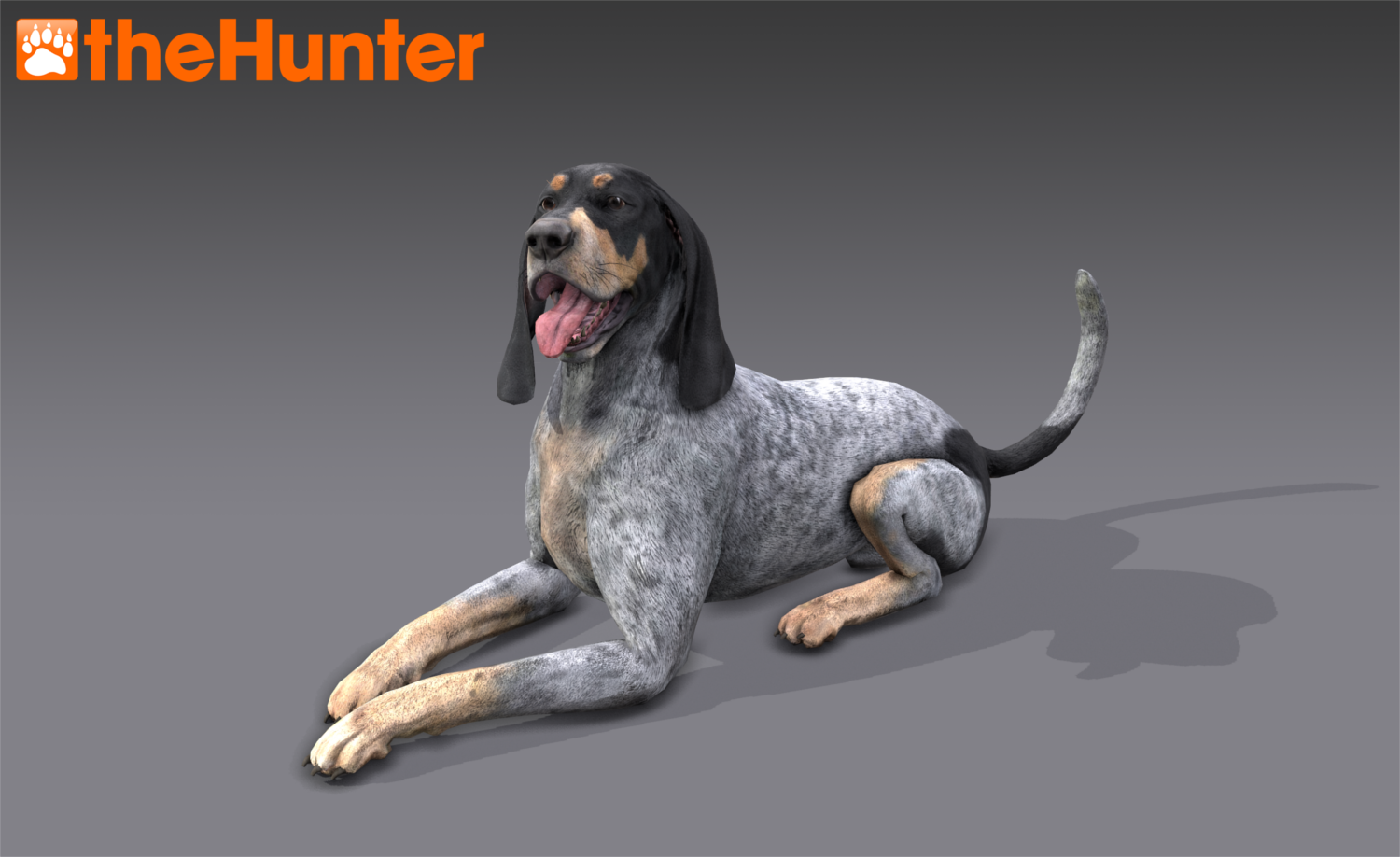 One year ago we released the first dog in theHunter: the jolly and rather unruly Retriever. It was a huge success and not too long after its release, players were taking their dogs with them regardless of whether they were out hunting waterfowl or deer. Soon however, it became evident that the Retriever, despite being fun to bring along on a hunt, was a retrieving specialist and not too much use when stalking deer or other animals. With the Scent Hound, you’ll get a loyal and disciplined hunting partner that you can take with you wherever you go.

Why a Scent Hound?

We saw that there was a need for a hunting dog that could cover aspects of the hunt that the Retriever was never intended to. This new dog needed to be a companion, but also serve a purpose other than simply being a pet that followed the player around. One game aspect that is time exhaustive and frustrating and also goes against hunting ethics, is animals that go unharvested due to the difficulty in finding them when they flee from the hunter after a poorly placed shot. It felt natural therefore to add a dog that would be a loyal friend out on the field, but also an aid to the player in finding those injured animals.

Impact of the dog on the game

Much like the Retriever, the Scent Hound is more of an experience and a convenience, as opposed to a game-changing addition to theHunter. The dog has no real impact on missions or competitions either since the stalking and shooting is still done by you. However, with this dog, the days of not finding animals are over.

Taking a dog with you on a hunt is simple: Just drag it out from the lodge or tent inventory and place into the dog slot in your own inventory. It will spawn next to you once you close the inventory screen. If this is the first time you bring your dog with you, you will be prompted to give it a name (choose wisely as it’s not possible to rename your dog – at least for now). Once you leave the lodge or tent area you won’t be able to un-equip the dog (try putting a Scent Hound into a backpack and see how that goes). You can access a set of dog commands by pressing the “V” button. While holding “V”, simply select the command you want to give your dog by moving the mouse in the relevant direction and confirming with a left-click. Play around with the different commands and see how your dog behaves. It’s a lot of fun! 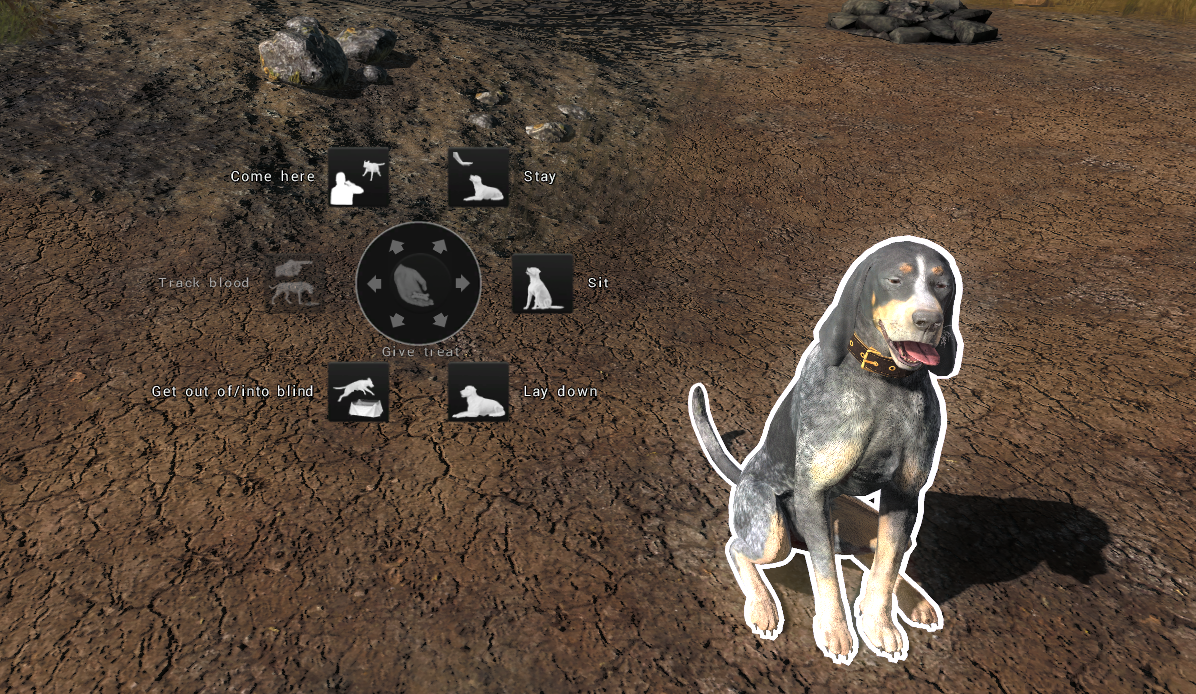 To track a wounded animal you’ll need to walk up to a blood track, ID it (left-click on the track with the HunterMate) and then hold “V” and select “Track”. The Scent Hound will move to the selected track to get its scent and then it will start tracking. It can track blood tracks and fleeing tracks of an animal, but not water tracks. When the dog has found the dead animal it will stay by it, baying and barking so you can easily pinpoint the location. When can a Scent Hound fail with tracking? Well, there are basically two scenarios. The first is that the dog simply got distracted during tracking. It may have caught the scent of another animal or the distance between two clues was too far. The second scenario is that the animal being tracked just got brushed by a projectile, bled for a few minutes then the bleeding stopped. In this case the dog cannot continue the tracking.

When you first purchase a dog, it’s already a capable Scent Hound. It should perform its tasks without any fuzz, most of the time. But if a dog does not understand a command, a small icon with a question mark is shown. If the dog understands the command then an icon with an exclamation mark is shown. If the dog is too far away to be given a command, the icon to the right will be shown.

More experience will make your Scent Hound hone its skills as a tracker, finding clues that are farther apart and finding them faster. Your dog has 50 levels and each new level comes with a skill increase or a small gift. Levelling up is fairly quick in the beginning but will slowly become tougher and tougher. You can see your dog’s experience and level in the right corner of the screen when you bring up the command menu, as well as its stamina state.

Each performed command reduces your dog’s stamina. This doesn’t have much impact on how long your dog can work with you, but a lower stamina means it gains less experience, such as a tired dog learns a bit less than a well-rested one. Letting your dog mind its own business will regenerate its stamina.

On your dog’s profile page you’ll see two sets of icons. One set governs basic dog skills, called Loyalty skills, the other set is specific to Scent Hounds. The number in the upper left corner shows which level your dog is at on that particular skill. Each skill starts out on level  1. All Scent Hound skills have a maximum of 3 levels, but some of the Loyalty skills have more. For information on what each skill does, just hover the mouse over the skill icon.

What about those darn rascally Retrievers?

We have reviewed the Retrievers as well and increased their skill levels across the board. They will be better at understanding commands and be a little bit quicker at finding and retrieving birds than before. They will still be quite rowdy when on the move but they will perform their duties in a much more stable manner.

To celebrate the release of our scent hounds we’ve prepared some tasty offers that you’d be barking mad to refuse. If you buy a dog before Tuesday, June 7th 12:00 CEST you’ll get a 20% discount and receive a cherry on top –  free Founder collar!  Please note that the free leather collar offer is only available in the Bundles section in the store. You can however buy dogs separately in the Dogs section.

Also, Daniel has created a special package of dog missions for you to hang out with your new buddy and try to win this gorgeous trophy. These are time-limited missions, and you have until Tuesday, June 7th 12:00 CEST to complete them.

We’ve also released three new winter vests for your dogs in the variety of colours – they will keep both your scent hounds and labs warm and toasty.

Now it’s time to go and make use of that heel command – happy hunting with your scent hounds!