Here comes our weekly status update with a bunch of small and a bit bigger news.

The Mule Deer scoring glitch that was introduced together with the release of non-typical antlers has now been fixed and will be deployed in our next game patch (probably next week).

Right now we are in the process of testing non-typical antlers for another species, many of you have already figured out what it will be. If you haven’t yet, check the store description for any weapon for its permitted species 😉 If the testing goes well and no bugs jump in we’ll be able to release them soonish.

The newly introduced .22 “Plinkington” Semi-Automatic Rifle has been quite a hit. After its release a lot of people commented on the spook radius which was unrealistically low for this kind of rifle. This was an oversight on our part which we missed during the testing, our apologies! The community divided into two camps, one wanted us to leave it as it is while the other suggested some tweaking to make it more realistic. We’ve decided to go for a compromise and stay true to the theHunter’s realism, so the spook radius of “Plinkington” will be increased but it won’t be as high as for large calibre rifles in theHunter. The change will go live in the next game patch as well.

Yesterday we released a much missed and long overdue addition to our spray scent portfolio – the “Fatal Desire” for Red Deer. Like other scents, it is available for both em$ and gm$ and will be included into our Mega Mix Scent pack in the near future.

Now to the last tidbit for today, which is a bit sad but still heart-warming. With a heavy heart our 3D artist Oskar has said goodbye to EW and theHunter to move on to his new adventure, which is closer to his hometown than Stockholm. Some of you may know Oskar by occasional posts in the forum but all of you know the fine dashes of his art in theHunter – Reindeer and Ibex models, the beautiful K98k Bolt-Action Rifle, the trophies for Valentine’s event 2014, an odd tree in Bushrangers’ Run and Val-des-Bois and much. much more. Oskar has left you the last piece of his craft which will reveal itself a bit further down the line.

Here’s Oskar’s goodbye picture for the theHunter community whom he really appreciated: 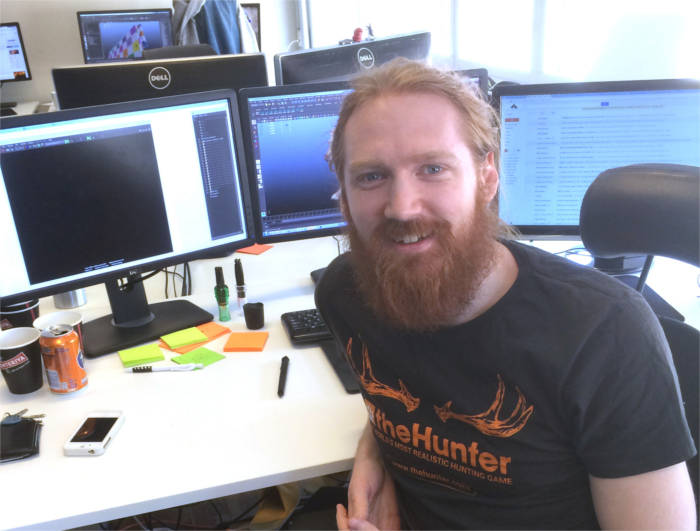 We of course are very sad to see Oskar leave and wish him all the best in his adventures. On the bright side, we have a bunch of talented artists here in house who are continuing to work their magic to make sure that theHunter continues as an absolutely stunning game.

That’s it from us for today.